Home Community Hunger has no religion; neither does kindness and compassion 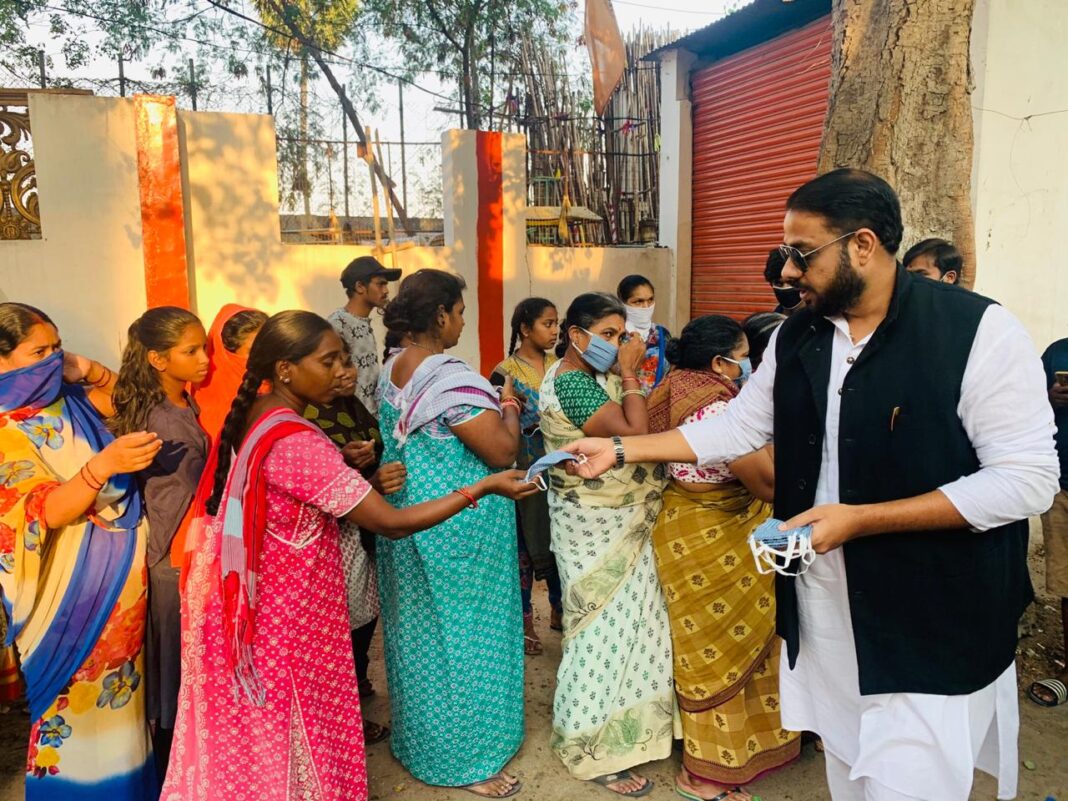 No day passes when Sohail does not carry out his charity activities in and around Hyderabad. What started as a simple act of feeding the destitute in memory of his beloved daughter, Sakina, has now turned into a cascade of charity activities extending to the rural areas of state of Telangana.

When his three-year-old daughter succumbed to pneumonia, Sohail aka Mohammad Asif Hussain was heartbroken. He gave up his political career and took to social work with a mission.

A builder by profession, Sohail was once a star campaigner for the Congress from the party’s youth wing. Back then, he campaigned for the party shoulder to shoulder with Rahul Gandhi. He travelled to almost all the states of India on party duty, attending conferences and meetings. He even attended a youth assembly at the UN in New York.

During his visit to the remote villages of the country, he saw poverty, destitution and starvation. He wanted to help fellow countrymen, but realised he could not to do much through politics. This realisation prompted him to explore other avenues of social work.

Soon, he embarked upon a project to feed the poor. He involved his wife in the new venture. While his wife would cook food, he would distribute it among the hungry on the streets.

What was the motivation behind his charity work?

Sohail says, “During my travels, I saw people picking up food from the garbage to feed themselves. The sight moved me and I decided to do something for the poor who can’t afford one square meal a day.”

The tragic death of his daughter turned his life upside down. He started looking at things from a different perspective. Suddenly he became conscious of the fragility of life. He realised there was pain and sorrow everywhere.

In his quest for easing the pain of fellow humans in whatever way he can, Sohail founded a trust called Sakina Foundation in 2010 and all the expenses incurred on its operation were borne by him.

‘We started with just 200 food packets. But today the number of people we feed every day has crossed the 1,000 mark. We have now hired services of cooks,” he said.

Apart from providing food to the hungry, Sohail adopted 1,200 children in and around Hyderabad. He takes care of all their needs. He remits their school fees, buys text books and other accessories for them. Though he does not accept donations, people voluntarily donate for the upkeep of these children.

Sohail does not have any permanent staff to carry out his good work. The 200-odd people associated with him in his mission are the volunteers who come forward to help him in whatever tasks he undertakes.

During the COVID-19 lockdown, when daily wage labourers were left high and dry, it was Sohail’s Sakina Foundation which was in the forefront of providing them succour. Despite statutory restrictions on the movement due to the curfew imposed by the government, he and his volunteers managed reach out to the needy. For this, they had to obtain passes from the police.

Later when half of Hyderabad was submerged due to unprecedented rains in October last, it was again Sohail who came to the rescue of the hapless flood victims. He helped them evacuate their houses and shifted them to safety ensuring them food and warm clothes.

His activities have won him the heart of an average Hyderabadi, earned him accolades from the government agencies and prominent personalities and organisations of the city. As for those who have benefited from his benevolence, Sohail is a messiah. His work has been covered extensively by several media houses including BBC News.

As all good works, his noble mission too had to cope with adverse propaganda unleashed by his detractors especially from rightwing fanatics who could not withstand the fact that a Muslim is feeding his Hindu brethren. He was discredited with epithets like ‘Food Jihadi’ and ‘Hunger Warrior’ on the social media. But he did not have to defend himself as his supporters could be able to silence the trolls after engaging them in a argument based on reason and logic. Sohail says, “Hunger has no religion. But it is the moral and ethical obligation of everyone who believes in the concept of religion to feed the hungry without taking into consideration his/her caste, creed, religion and region.”

Sohail, along with other social activists from Hyderabad, visited the farmers on an indefinite protest at Singhu border near Delhi in support of their demand for repeal of three anti-farmer legislations. Sohail’s foundation is engaged in providing supplies to the makeshift kitchen installed to feed the protestors there. Through his network, he ensures free flow of supply to the kitchen.

All this while, issues pertaining to children are close to Sohail’s heart. He is especially perturbed by the sexual crimes against children. He has devised an awareness campaign for prevention of such crimes.

“In view of growing incidence of sexual exploitation of children in the society,” he said, “we have trained our volunteers with the help of the police and the legal professionals under the aegis of ‘Telangana Parents Association for Child Rights and Safety’ to teach children at schools and slums how to protect themselves against sexual abuse, how to distinguish bad touch from good touch and report it to their teachers, parents or any adult they could trust.”

The volunteers impress upon the teachers to set up safety/ protection committees. This activity also includes training on child rights and the laws related to children.

No holiday for this large hearted noble soul. Sohail does not take even a day off from his humanitarian mission. He is ever ready to reach out to anyone in need at any hour of the day come rain or shine. He does not seek any reward or recognition for his humanitarian work. He says he has dedicated all his services to the memory of his deceased father and daughter.

Assembly polls punch holes in BJP citadel with battles ahead in...

UP population ploy: Education, not punishment the right answer