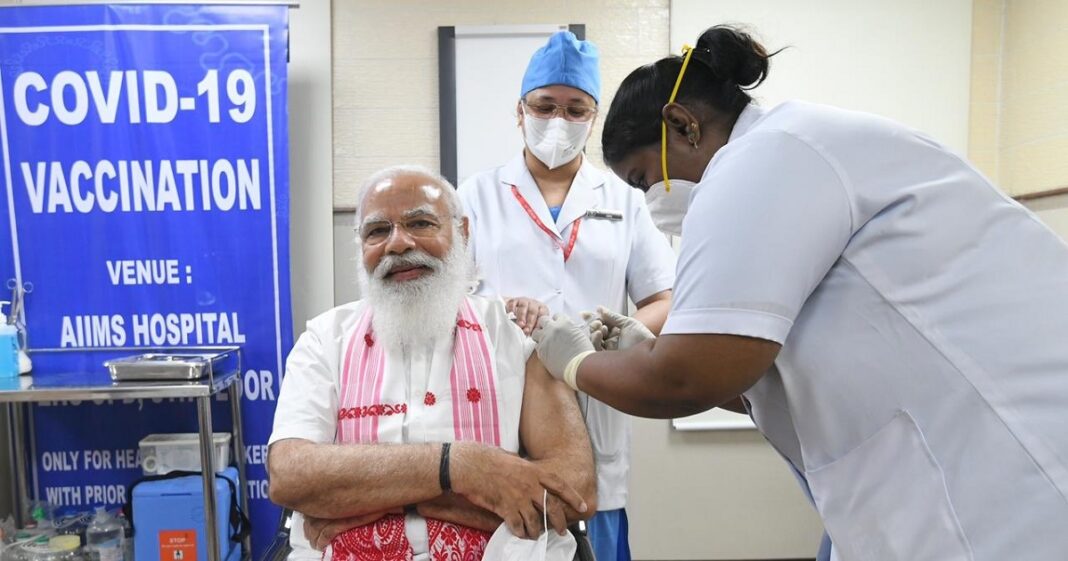 Visuals of Narendra Modi taking the first shot of Covid vaccine – Covaxin – at All India Institute of Medical Sciences (AIIMS), Delhi went viral on social media. The Prime Minister took the initiative in the early morning of Monday to allay apprehensions of the common man over the vaccine.

It may be noted here that on March 1, 2021 is the day on which vaccination of people above 60 years of age and those who are above 45 years but living with co-morbidities commenced.

There have been doubts in the general public about the safety and efficacy of the vaccine ever since it was approved by the government.  In this context, the significance of Modi taking the vaccine himself is bound to send across a message to the citizens and dispel their fears.

Drug Controller General of India approved two vaccines Covaxin and Covishield in January this year for emergency use. Covaxin, developed by Hyderabad based Bharat Biotech Limited, is an indigenous vaccine. It came under the shadow when many healthcare workers questioned about its side effects and refused to take it as the result of its third phase clinical trials are yet to be released.

Against this backdrop, many Opposition leaders had suggested that Prime Minister Modi and his Cabinet colleagues should take the vaccine themselves first to address the fears of the citizens. However, political leaders could not take the shots in the first phase of vaccination drive which was meant for only healthcare and frontline workers.

Meanwhile, it is learnt that though vaccination of late has picked up pace but not to government’s expectations. Cases of Coronavirus are again on the rise in Maharashtra, Kerala, Tamil Nadu, West Bengal, Gujarat and Madhya Pradesh. Concerned over the development, the Centre has directed states and Union territories to accelerate the vaccination drive and dispel the fear of the common man about the vaccine.

One Team-One Dream: A delightful obsession of fans of Indian Hockey